EUSTREAM supports the climate objectives defined in the Paris Agreement and the European Green Deal. We want to contribute responsibly towards making Europe the first climate neutral continent as soon as possible.

In addition to other measures, the solution also includes gradually increasing use of renewable and low-emission gases. We want to become a regional leader within this process, who will help start the development of a new hydrogen energy industry. In order to speed up necessary changes, we have already been investing into energy transformation projects.

EUSTREAM plans investments thanks to which we will be able to add up to 5 % of hydrogen to the transportation network commencing from the end of the year 2023. In view of currently transported volumes, it means that Slovakia will be soon technologically ready to transport theoretically more than two bcm of hydrogen per year and thus to accommodate expected gradual increase in hydrogen supply/demand.

We plan to dedicate one of our parralell pipelines for transportation of pure hydrogen, which will become a part of the European Hydrogen Backbone network, with direct connections to neighbouring countries. To support achievement of this objective, we have developed an extensive research and development project - H2I-Transmission. After succeeding at the national level at the beginning of the year 2021, the project was registered for further steps within the Important Projects of Common European Interest (IPCEI) framework. 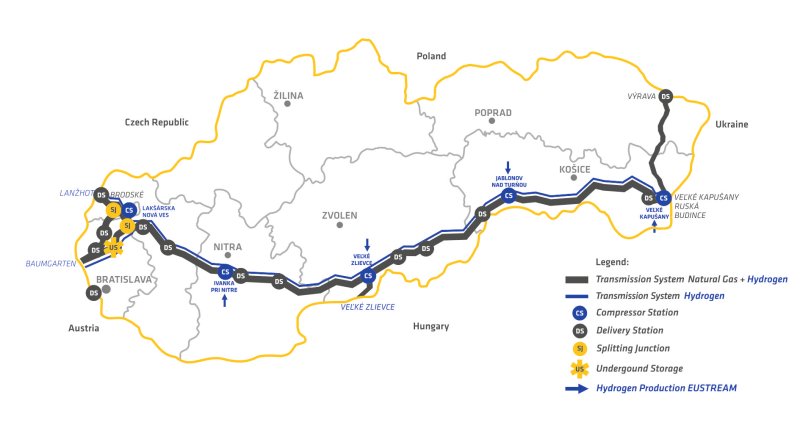 Moreover, we have been planning production of green hydrogen from renewable resources, which will be used within the initial phase as a gas for compressor propulsion. The first pilot project of this kind has been prepared for the Veľké Kapušany compressor station with the production launch scheduled for 2023 and options for further extensions. We have been also working on other projects that focus on various low-emission gas production and transportation alternatives and cooperating within various projects for production and transportation of the hydrogen produced from natural gas with capture and storage of CO2 (CCS).

In energy transformation, we promote responsible solutions, which include maximising the decarbonisation potential of natural gas in the transition period. Until new green energy capacities are fully available, the correct policy is to replace the largest sources of pollution with natural gas, which is a less carbon-intensive alternative. The transition from coal to the right mix of natural gas and renewables is currently a quick and effective solution which, in addition to reducing greenhouse gases, helps to considerably improve air quality.

EUSTREAM is a partner in several international partnerships focusing on hydrogen development:

Accept All Reject All Show detail